The Magic Pudding – too much of a challenge?

The other day I met a lovely woman who, when asked what she did for a living, lowered her eyes and replied “I’m a librarian.”

“Why sound apologetic?” I responded, “There’s nothing wrong with being a librarian. I bet it’s a great job.” She looked up and replied that she loves her job and that it can be very varied, but that people assume she sits around all day reading books and shooshing visitors. “It’s not like that at all!” she explained. I sympathised and we then went on to discuss books, particularly children’s books. I asked her if she can see a change in the way they’re written today. Did she think, like me, that they are less lyrical and less challenging than books of old – particularly the classics. She did concur and said that in her opinion children are not being pushed to learn the intricacies of the English language in the way we were. A shame, we agreed.

One children’s book that springs to mind is The Magic Pudding by Australian author Norman Lindsay. It was written in 1918 but was still being read avidly by children of my generation in the 1960’s. My copy was printed in 1948 and handed down to me by my father. I still treasure it and would pass it down myself, but I suspect these days children would find it bewildering. Here’s an excerpt: 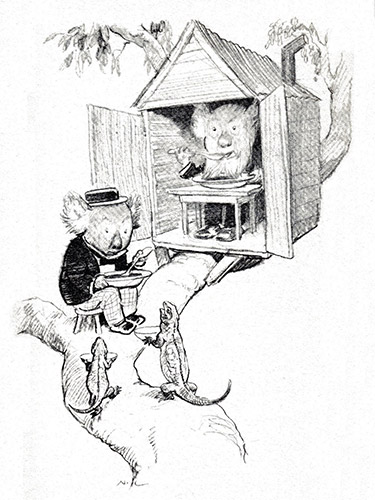 “How now,” exclaimed Uncle Wattleberry. “My nephew Bunyip among these sacrilegious whisker-pluckers and nose-pullers. My nephew, not only aiding and abetting those ruffians, but seeking to palliate their crimes! This is too much. My feelings are such that nothing but bounding and plunging can relieve them.”

The Magic Pudding is said to have been written to settle an argument. A friend of Lindsay’s said that children like to read about fairies, while Lindsay asserted that they would rather read about food and fighting. This proved to be be true, and I expect it’s still true, but I wonder if children these days would have difficulty with this book – the wording and the rhymes: